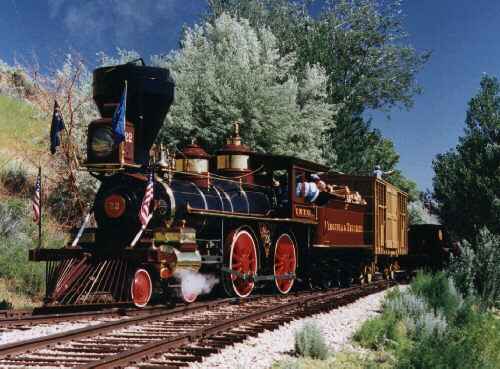 Pictured at Carson City during the Fourth of July celebration.

Other than the famous RENO steam locomotive, the second most popular iron horse on the V&T is the INYO. Out shopped by Burnham, Parry, Williams & Company, Baldwin Locomotive Works in February of 1875, the 4-4-0 arrived in Reno on March 22, along with the J. W. BOWKER, to begin a long career starting in April. The wood burner cost $9,065 and when filled to capacity with approximately 2,000 gallons of water and three cords of wood, weighed over 58 tons, INYO, the name applied, is Indian meaning "dwelling place of a great spirit." INYO is also affixed to a lengthy mountain range and a large county in eastern California. No. 22, nicknamed the BRASS BETSY, gained the admiration of many of the road's veterans and rightly so as it came furnished with an enormous amount of highly polished brass work including the bell and bell stand, steam dome and sand box casing, boiler jacket bands, cylinder jackets, and running board edging.

By 1879, the brass bedecked engine was employed in the V&T's regularly scheduled mixed passenger and freight service. At other times it substituted for the RENO and GENOA engines when they were in the shop. Beginning in the 1890's, No. 22 handled the road's crack Virginia City express train and saw extensive use during the Tonopah mining boom soon after 1900. In 1910, the INYO was next to the last of the V&T iron horses to be converted to burn oil. From 1926 on, the engine was considered to be retired, although she did replace the RENO occasionally.

The BRASS BETSY became the first of many V&T cars and locomotives acquired by Paramount Pictures. In 1937 No. 22 starred in HIGH, WIDE AND HANDSOME, followed by roles in UNION Pacific, RED RIVER and Disney's THE GREAT LOCOMOTIVE CHASE. She last operated in 1965 for the TV series WILD, WILD WEST. Four years later the INYO participated in the Gold Spike Centennial at Promontory, Utah. Starting in 1970, the engine appeared as a replica of the Central Pacific's JUPITER at the Gold Spike National Historical Site. The State of Nevada purchased the 4-4-0 in 1974 and when it was no longer need for display the ex-V&T engine returned home to Carson City. After more than a year of restoration work, the INYO made her debut on May 29, 1983. Since then the wood-burning BRASS BETSY has operated on numerous occasions and participated at the grand opening of the Palace Station Casino in Las Vegas during April of 1984. It was also one of the stars at the 1996 4th of July Transportation Fair.

More information can be found in "The Restoration Feasibility Investigation on Virginia & Truckee Railroad Locomotives Nos. 18 "Dayton" and 22 "Inyo"" Dated October 1979 is available from the Museum Store for $29.95. Please call (775) 687-6953 to order.