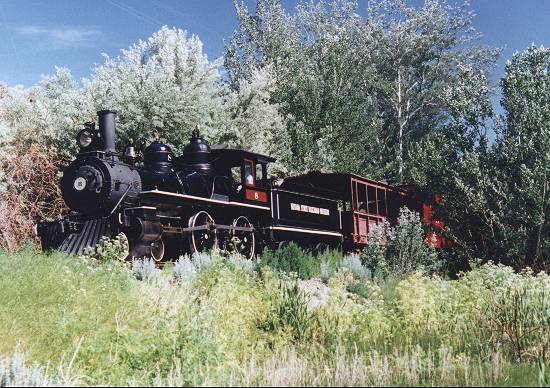 The No. 8 was originally built in 1888 for the Denver, Texas & Fort Worth Railroad by the Cooke Locomotive & Machine Company. There is a 17-year gap in the history of this locomotive from circa 1890 until September 1907 when it was acquired by the Arkansas-based Dardenelle & Russellville Railroad.

In 1938, this classic 4-4-0 was leased to Twentieth Century-Fox Films for use in the film Jesse James. Following this star turn the locomotive was put back into service on the D&R Railroad until 1945 when it was sold to Twentieth Century-Fox. After appearing in several major movie productions including Sentimental Journey, Centennial Summer, and Scandalous John, No. 8 sat unused on the movie company’s back lot in Malibu for approximately ten years. In January 1972, the locomotive was purchased by Shortline Enterprises. Restored to operating condition, the steam engine has been used in various movies and TV specials such as The Gambler starring Kenny Rogers.

Except for a period during 1976 when the locomotive operated as the V&T RR No. 28 on Bob Grey's tourist railroad at Virginia City, NV, it ran out of Jamestown and Sacramento. In 1981, the locomotive helped celebrate the grand opening of the California State Railroad Museum in "Old Town" Sacramento. This engine was acquired by the Nevada State Railroad Museum to provide steam powered train rides at the museum's Carson City site.