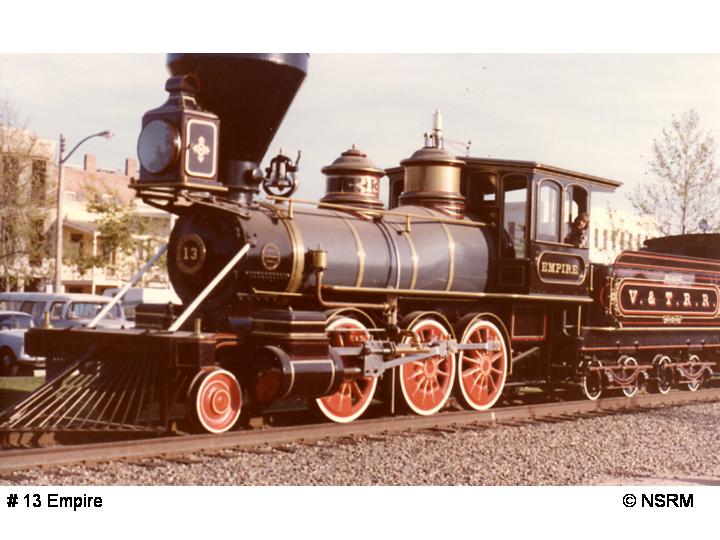 Virginia & Truckee Railroad General Superintendent Henry M. Yerington ordered steam locomotive No. 13 early in October 1872, soon after the Nevada short line had completed its connection with the transcontinental Central Pacific at Reno. The V&T had become taxed beyond capacity with freight and passenger traffic. Carloads of freight destined for the Comstock crammed nearly all of the sidings and yards on the 52-mile line. Deluged with business, the V&T found itself without an adequate number of steam locomotives and passenger cars to handle the increase in traffic. Superintendent Yerington solicited the Central Pacific and Union Pacific Railroads for surplus engines and was able to rent several CP American-type locomotives on a monthly basis. This solution was only temporary however, and Yerington reluctantly concluded that the railroad needed additional motive power.

Locomotive No. 13 was delivered to the V&T in February of 1873. Empire was an appropriate namesake: Empire City, located three miles east of Carson City, was an important territorial town and station on the Overland Route, and site of several cord wood yards and ore reduction mills. The engine quickly entered freight service on the line from Virginia City to Carson City and Reno. From the late 1880s to 1902 as frantic traffic conditions abated, the V&T held No. 13 in reserve. With an upswing in the economy, the No. 13 received a major overhaul and was once again placed in regular freight service. In 1910 the Carson City shops converted the Empire from wood to fuel oil. Because V&T engine crews considered No. 13 an unlucky number, the number was changed to V&T second No. 15 at this time.

The locomotive was placed in storage and retired in 1918 because of declining business on the V&T. It was sold in 1924 to the Pacific Portland Cement Company of Gerlach, Nevada where it saw service as PPC Co. switcher No. 501 until 1931. In 1938 the Empire was donated to the Pacific Coast Chapter of the Railway & Locomotive Historical Society and moved to the San Francisco Bay Area. There it remained until 1966 when it underwent a cosmetic restoration at Bethlehem Steel Corporation's San Francisco shipbuilding yards.

In 1976 the locomotive moved into the newly-reconstructed Central Pacific Railroad Passenger Station in Old Sacramento. A total restoration effort by the Museum began two years later. The tender was stripped, rust and holes filled, and repainted in original V&T colors. The trucks were cleaned and repainted and new brake beams of oak were added. Except for a single end timber, the tender frame was replaced.

The locomotive was stripped to its driving wheels, frame and boiler. A new brass steam dome wrapper and simulated Russian iron boiler jacket was fabricated and installed, as was a new Baldwin Yankee-style smokestack. A new cab made of ash, as on the original engine, and numerous small fittings reconstructed from period photographs and drawings brought the locomotive close to completion. In a final step craftsmen repainted the locomotive in the original V&T colors, complete with gold-leaf striping.

Since 1981, the Empire has been displayed surrounded by mirrors where visitors can appreciate all aspects of 1870s locomotive construction.