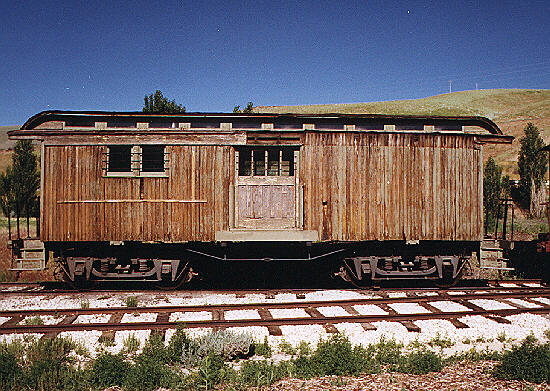 Hauling express and mail was always an important business for passenger trains. In 1906 the Virginia & Truckee found itself in need of an additional car to serve the new Minden branch, and built this car in its own shops. Originally numbered 20, it was quickly renumbered as No. 21 with the arrival of the new coach No. 20 from Hicks Car and Locomotive Works in 1907. It was originally equipped with freight-style arch bar trucks, but received its present set of secondhand Southern Pacific trucks in May, 1911, at the same time the end doors were added. In August 1914, the side passenger doors were removed. In 1930, the lettering was changed from Wells, Fargo & Co. Express to Railway Express Agency, and the Railway Post Office was removed by November 1932. Express-mail No. 21 faithfully served the V&T for 32 years, and was part of the last regular train out of Virginia City in 1938.

Later in 1938 No. 21 was part of the large equipment purchase by Paramount Pictures in preparation for the Cecil B. DeMille movie Union Pacific. The side windows were added by the movie studio at this time. In the 1940s the V&T purchased the Nevada Northern steel underframed express-mail car No. 21, which became V&T second No. 21. Meanwhile, first No. 21 was acquired by Short Line Enterprises on November 5 1971 for continued movie service, and was part of the large purchase by the Nevada State Railroad Museum in 1988. It is presently awaiting restoration.