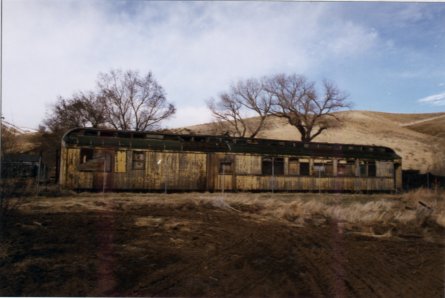 Southern Pacific Wood Harriman Standard Coach-Baggage-Postal Car No. 3156 is one such car, and among the last of the wood Harriman standard cars built. It was constructed by Pullman in 1910 for the newly formed Arizona Eastern Ry., a Southern Pacific Subsidiary. Records are not conclusive, but it appears to have originally been numbered AE No. 500, soon changed to No. 401. Sister car AE No. 451 had been built earlier the same year for the predecessor Arizona and Colorado. Both were classified 69-CBC under the Southern Pacific classification system.

Following the SP years, the car passed through a series of owners until 1991, when the local county desired to lay a water line through the location where the car was located. The owner of the car could not afford to move the car, so desiring to see the car saved, he contacted the Nevada State Railroad Museum about a donation. An agreement was reached, and the car was moved to the Carson City museum location in September 1991, where it awaits restoration.