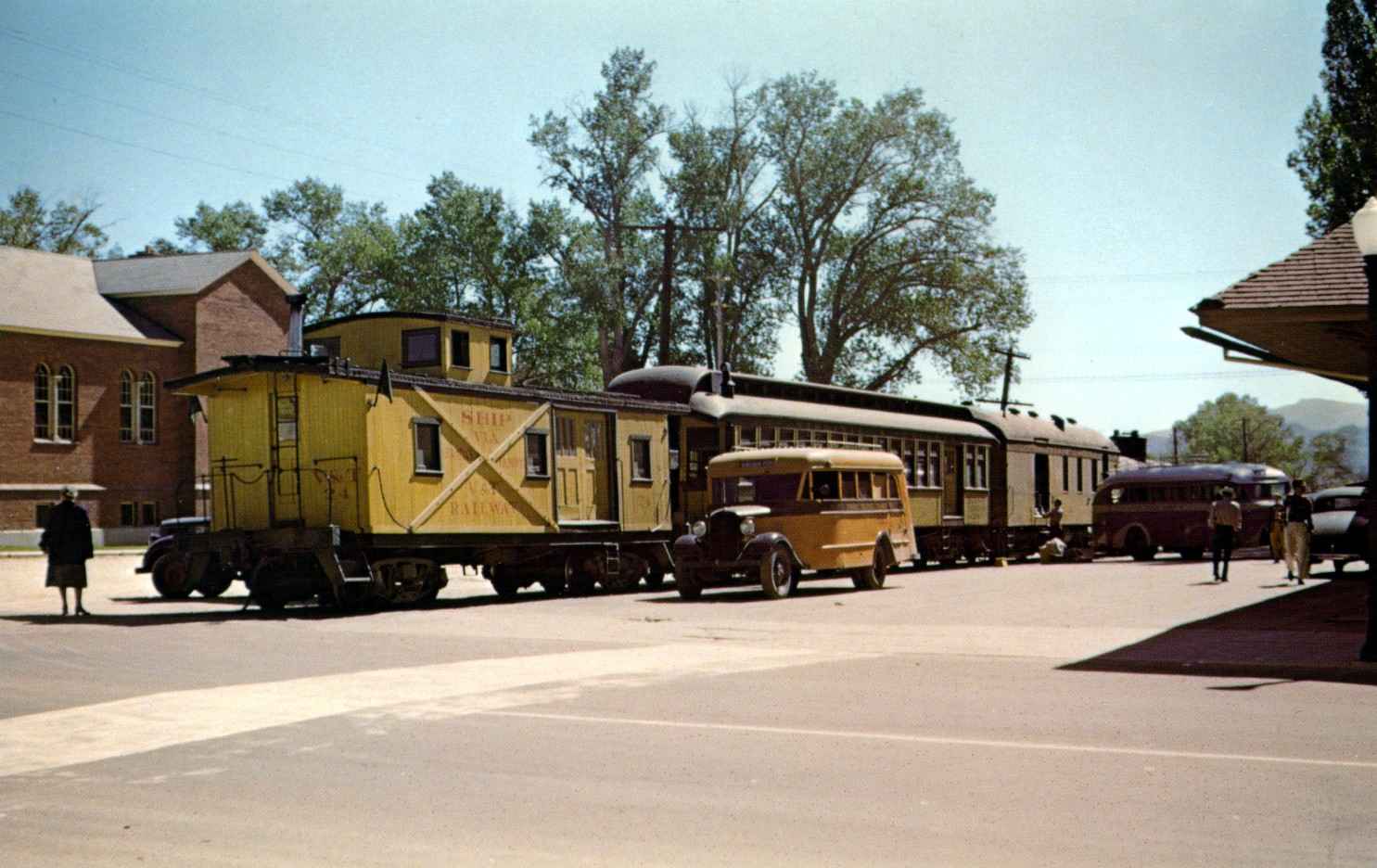 Serenely spotted next to the spacious platform of the Carson City passenger depot across from the civic auditorium, the majority of the last remaining passenger train cars of the Virginia & Truckee Railway reluctantly await the return of head end motive power for the remainder of their daily run south to the small community of Minden. Pulled into Carson by V&T engine No. 27, the mixed assemblage awaits the completion of No. 27's daily chores which include refueling at the nearby fuel oil tank and local switching of cars in the Carson Yards up ahead.

Directly behind the sole freight tanker stands V&T RPO No. 23, its 58 inch baggage door open and already handling the affairs of local mail and baggage. Out shopped by Pullman in 1911 for the Texas & New Orleans Railroad, the 40 foot steel car arrived at Carson City on October 30, 1946, via the Yosemite Valley Railway. Pictured behind No. 23 is wooden Combination No. 18‑an 1890 product of Barney & Smith which was purchased new for $5,000 as a 50 foot 6 inch all‑passenger coach. Concluding the brief string is Caboose‑Coach No. 24 with its bright side billboard proclaiming "Ship via Nevada's famous V&T Railway." Measuring 30 feet in length, No. 24 was acquired by the V&T only in 1947 from the faltering Nevada Copper Belt Railway.

Born of necessity on March 5, 1868, the V&T Railroad spanned 52 miles between Reno, Carson City and Virginia City by the end of construction in 1872. Built to monopolize efficient and luxurious transportation to and from the famous silver mines of the Comstock Lode, the V&T expanded 15 miles south to Minden in 1906 when Virginia City mining activity was at its ebb. As the functioning headquarters for the short line, the Carson City Yards boosted magnificent repair shops, large freight and passenger depots and the general offices of the Nevada Corporation.

Barely visible here by only a protruding eave corner and its pointed shadow, the combined passenger station and central offices of the Nevada Railway measured 31.3 by 144.2 feet in its entirety while its rear platform of initially wooden planks stretches out 42.3 feet to the main line trackage down Washington Street. Located on block number one of Vanwinkle and Proctor's Addition, the entire block of 0.663 acres was purchased in the name of William Sharon from H. H. Bence on September 1, 1869. Turned over in 1952 for Masonic and office use, the long structure today is still the official Nevada office for the famous Carson & Colorado Railroad Company.

The Virginia‑Truckee Transit Company was organized by the V&T to meet highway bus competition for passengers, express parcels and mail. Following purchase of the Dewey Stage Line, half interest in the Crumley Transportation Company and two‑thirds interest in the Reno‑Virginia Transportation Company, the V&T affiliate operated scheduled runs between such points as Reno, Carson City, Virginia City, Gardnerville, Hawthorne and Lake Tahoe. Purchased by the V&T Railway on December 31, 1947, for $25,000, the golden bus of the transit concern here waits along side Combination No. 18, her board reading "Virginia City'' and ready to convey passengers to the now rail‑less Golconda boom town which decades earlier had felt the pulse of several dozen daily crack trains.