The McKeen Motor Car Company built some of the most unique motor coaches of the early part of the 20th century. William McKeen built over 150 cars between 1905 and 1917. As the Union Pacific RR, Superintendent of Motive Power and Machinery, McKeen was asked to find a way to lower passenger traffic expenses. He developed a novel design that was ahead of its time, yet did not develop with the times. Due to his close association with the Harriman lines (U.P. & S.P. and others) many of the cars were built for these railroads. The earliest models were built in U.P. shops which were eventually leased to him.

The streamlined design was ahead of its day, but the engine and mechanical drive were unreliable, as were almost all engines in 1905. The original 100h.p. Standard Motor Construction Co. engine was replaced with proprietary 200 or 300 h.p. engines in 1907. This engine was not much better. 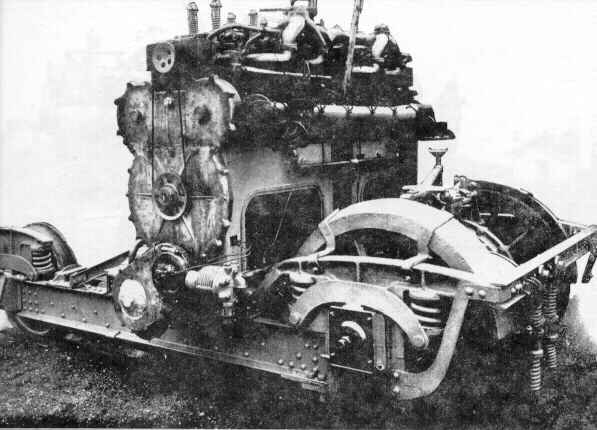 The McKeen built engine (shown above) had an air operated clutch as did the last purchased engines. Both engines were based on marine designs and proved to be unreliable. After Harriman, the railroad tycoon and his mentor died, not even the U.P nor S.P. needed any new models. They had McKeens sitting all over the place, in various states of disrepair. Any railroad with these cars eventually scrapped or converted them to a better gas mechanical or gas/diesel electric drive. 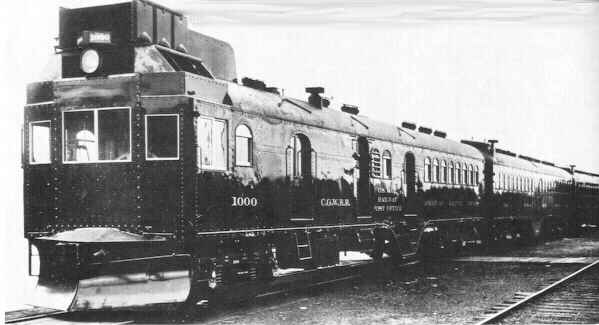 This 1910 70' McKeen was rebuilt with a steam power plant in 1923. In 1928, EMD converted it again to gas motive power, now with electric drive. In that form it lasted into the 1950's. The dropped center door is about the only clue to its origin. The last McKeen built car left the plant in 1917. The plant was on U.P. property and the company was financed by the U.P.'s owner, so when it closed, the U.P. was left with all the assets and even more debts. Ten years later they built the last two motor cars from left over parts. 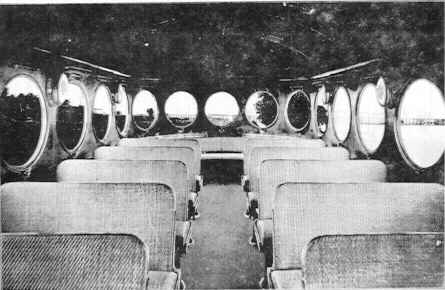 Interior view clearly shows the round windows or "portholes". They were a hallmark of the McKeen Motor Cars after car number M-7 in 1906. It was claimed that they made the body stronger. 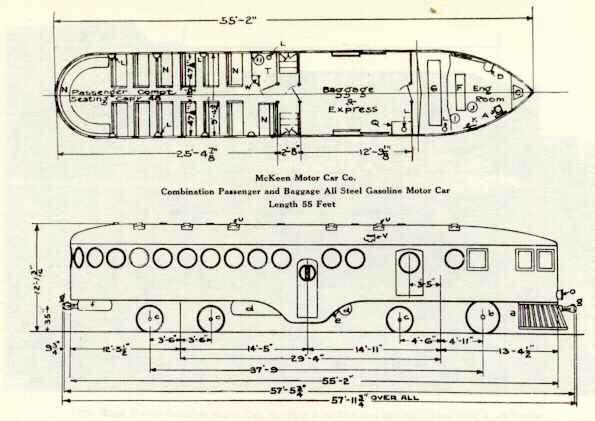 The radical "wind-splitter" design (the term streamlining had not yet been coined) is obvious from the top view. Even with modern techniques it is debatable whether it is more aerodynamic running forward or backward. The 55 footer (above) had a 12'9" baggage & express area and seated 48. A 7'3" baggage & express area ( one porthole ahead of the unique dropped center doors) allowed the car to seat 56. When the entire storage area was replaced with a 8 seat smoking area, it seated 64. This version had 3 portholes ahead of the center door and no baggage door. 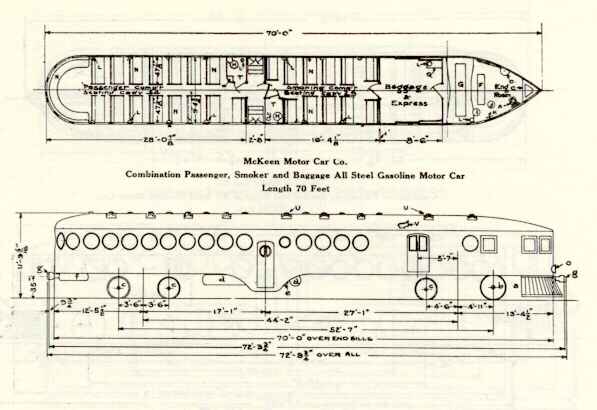 The 70 footer also came in a variety of floor plans. The standard all passenger model seated 105.

Note:
This page was previously located at: http://www.geocities.com/Athens/Aegean/4742/mck.HTM. Thank You.